I love the Fourth of July

I love the Fourth of July.

I love the Fourth because of the Declaration of Independence. 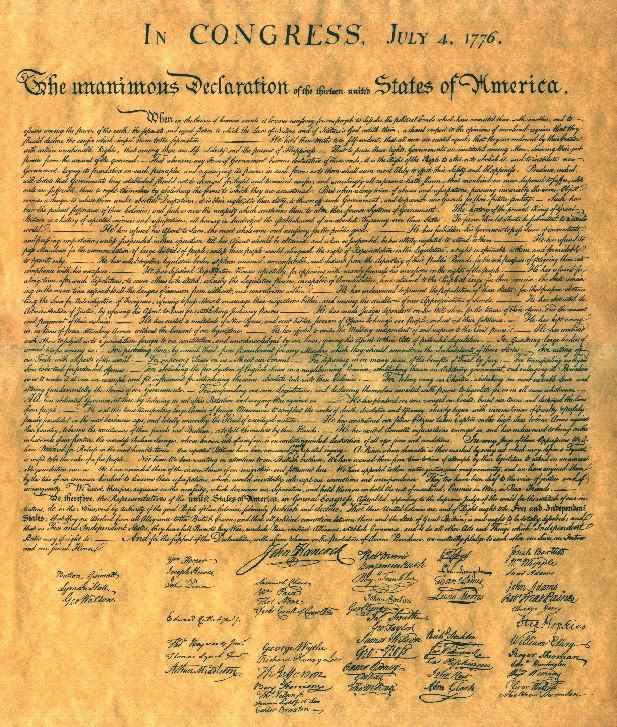 It began sometime in my childhood. At some point, on some vacation, at some historical site, my parents bought me a facsimile of the Declaration. It probably tells you all you need to know about me that I thought this was a great souvenir. It was hard, brittle, yellowed paper that crackled when you handled it. For some time I thought all official documents were thus. So when, in the fifth grade, my classmates called upon me to write a peace treaty ending the Great Spitball War between Group 2 and Group 3 (a foreshadowing that I would one day study diplomatic history?), I insisted on taking the piece of paper, coloring it with a yellow crayon, and then crumpling it up in a ball and flattening it out so that, at least to my eye, it looked like my copy of the Declaration. Then it was official.

Later, I eventually stopped wondering why there were so many "f"s where there should clearly be "s"s, and thought more about its content. Just about every American is familiar with the most famous passage about the self-evident truths. But there is a lot more to the Declaration. Much of it, the bulk of it really, is essentially an indictment of George III justifying the break. Reading it with an historian’s rather than
a patriot’s eye, many of the points don’t really hold up. But my favorite part of the Declaration isn’t one of the well-known lines, or something obscure from the list of charges. It comes at the end, just a simple, short phrase, and it encapsulates for me what is best about the Fourth of July.

When you think about it, July 4 isn’t really the most natural date for the nation’s birth. There are other turning points we could have chosen, for example, the outbreak of hostilities. Using that criterion, April 19, 1775, the date of the battles of Lexington and Concord, would be a better choice. Perhaps February 6, 1778, the date a great power, France, recognized American independence and entered an alliance with the U.S. that would help win the war, would be fitting. Legally one could argue that April 9, 1784, the date Britain recognized independence with its acceptance of the Treaty of Paris, was the true independence day.

But we didn’t chose the date of a battle, or the recognition of a great power, or the acceptance of the mother country. We chose the date of a declaration. What does July 4, 1776 mark, after all? A decision. An intention. Not a change in fact, but a change of mind. Looked at coldly, purely as a matter of fact, the Declaration is an absurdity. The colonies declared that they were independent, but they clearly were not. The colonies were still ruled by royal governors appointed by the King, and were occupied by tens of thousands of British soldiers. But the declaration nonetheless boldly states, in the words of a resolution first proposed by Richard Henry Lee nearly a month earlier, that “these united Colonies are, and of Right ought to be Free and Independent States.”

And it’s that phrase that I love: “and of Right ought to be.” The Declaration is not one of fact. It is one of what “of Right ought to be.” This country was founded with its eyes on the Right. Those men who signed the declaration were not always right. About some things, many of them, in many ways, were tragically wrong. But they knew the importance of what ought to be. And they knew that the most important date was not the one when men took up arms, but when they decided to do what was right. When it has been at its worst, this country has settled passively for what is, or what cynics said has always been and thus must always be. When it has been at its best, it has remembered to keep its eyes on what "of Right ought to be."

Have a wonderful Fourth of July, and sometime between the cookout and the fireworks, think a little about what of Right ought to be. And then work to make it a reality. That’s what the Fourth, and being an American, means to me.