"I have to say the sheer lack of any grace among some liberal commenters on what was an obvious outreach to African-Americans depresses me." Sullivan thinks critics have been "too harsh" and that Paul deserves some credit for his criticism of the drug war.

Sorry, but the fact that Paul had one idea that might actually benefit some part of the black community does not mean he gets a pass on the rest of that address.

Like his father, Rand Paul often does get a pass because of the evident sincerity of his beliefs. Sincerity is certainly refreshing among politicians and to be lauded when it appears. But I find it hard to believe Paul was being sincere at Howard University. 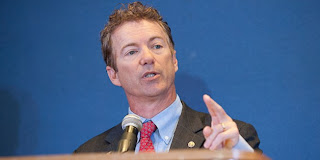 I wrote nearly three years ago in the aftermath of his infamous interview with Rachel Maddow, "I believe Paul is sincere when he says he has no racial animus." I still believe that (that some people seem to think this in itself is notable and commendable is a sad commentary in and of itself).

But when confronted with that interview by a questioner at Howard, Paul disputed that he had ever "wavered in my support for civil rights or the Civil Rights Act." That is simply not true. He is on record opposing the part of the act that applies to privately owned businesses.

He believes that restaurant owners ought not to discriminate against black customers because it is bad business, but he does not believe government should make that illegal. He opposes that part of the Civil Rights Act (and a not insignificant part it is). But he did not have the integrity to say that at Howard. He lied instead.

Paul completely ignored the history of the "southern strategy," with which the questioner was clearly familiar. Even when asked about it, Paul simply denied it. Instead he said: "the Republican Party has always [emphasis added] been the party of civil rights and voting rights."

There can be no true Republican "outreach" or "re-branding" on civil rights unless the party ends its denial and confronts and forthrightly repudiates its history since the Civil Rights Act. The undeniable truth is that the GOP made a conscious, deliberate decision to exploit the white backlash against that law, and has been reaping political benefits among some white voters ever since.

Also on the topic of Republican re-branding, one aspect of Paul's address has gotten relatively little attention: the way he revealed that he basically shares Mitt Romney's 47% mindset and Paul Ryan's "makers and takers" rhetoric.

After extolling the largely positive civil rights record of the Republicans through the 1950s, Paul did attempt to explain why the GOP lost African-Americans. His explanation is the same as Romney's for why he lost the last election: the Democrats bought black votes:


"I think what happened during the Great Depression was that African Americans understood that Republicans championed citizenship and voting rights but they became impatient for economic emancipation.... The Democrats promised equalizing outcomes through unlimited federal assistance while Republicans offered something that seemed less tangible-the promise of equalizing opportunity through free markets."

"Equalizing outcomes through unlimited federal assistance." The Democrats bought your votes, he effectively said, by offering you free stuff. And, unfortunately, African-Americans somehow have failed to see the "less tangible" benefits of Republican policies. He seems blissfully unaware of how insulting that argument is.

He also plays a cynical game. He tries to turn his brand of libertarianism into the instrument of black liberation, by equating his aversion to federal power in general with the African-American opposition to the abuse of power by the states of the Jim Crow South.

"The history of African-American repression in this country rose from government-sanctioned racism." That much is true.

"Big and oppressive government has long been the enemy of freedom, something black Americans know all too well."

It was not "big" government that brought about Jim Crow. It was oppressive small governments. It was an empowered, big, federal government that proved to be the only institution in America able to end Jim Crow. African Americans know that, even if Rand Paul pretends to be naively unaware of it. His blinkered view of freedom is one that, had it ruled the day in 1964, would have left intact the daily insults to the dignity of every African American, as long as the perpetrators were private individuals and businesses. The audience at Howard knew that too.

Paul also showed an appalling ignorance of the Constitution: "The bill of rights and the civil war amendments," he said, "protect us against the possibility of an oppressive federal or state government." It makes no sense to conflate the Bill of Rights and the Reconstruction Amendments. The first ten amendments all limit the federal government, but the 13th, 14th, and 15th all empower the federal government. And it was that empowerment that made possible the final abolition of slavery, the temporary civil rights advances of the Reconstruction era, and eventually, the Civil Rights and Voting Rights Acts.

People who do not wear the kind of ideological blinders permanently attached to Paul know that federal power is neither inherently good nor inherently bad. It depends on circumstances, on how it is employed. But that seems too confusing for the simplistic libertarian mind to wrap itself around. It is so much easier to just flatly deny any historical reality that contradicts your infallible ideology. And then condescendingly tell other people, who know all too well that historical reality, that they have simply failed to appreciate your truth because your ideas "seemed less tangible."

Rand Paul had barely begun his speech when he effectively congratulated himself for giving it: "Some have said that I’m either brave or crazy to be here today." Andrew Sullivan may be more inclined to the former, but if Rand Paul honestly thinks the message he gave at Howard was true "outreach" that will win over many African American voters, I'm inclined toward the latter.

A Revolution in Parenting

Parents around the world had been buzzing for months about massive open online parenting, or MOOPs: Internet-based parenting programs designed to raise thousands of children simultaneously, in part using the tactics of social-networking websites. To supplement video parenting, much of the learning comes from online comments, questions, and discussions. Children even evaluate one another's behavior, relieving the online parent of the tedium of correcting them.

MOOPs exploded into parenting consciousness in summer 2012, when a free parenting platform offered by Cranford University in California attracted 160,000 children from around the world — 23,000 of whom finished it. Now, Parentsera in Valley View, California — one of the three researcher-led start-up companies actively developing MOOPs — is inviting star parents to submit parenting courses for broadcast on its software platform.

Self-esteem boosting, tender loving care, and homework help courses have been in the vanguard of the movement, but offerings in bedtime reading, discipline, and moral guidance are growing in popularity. “In 25 years of observing parenting, I've never seen anything move this fast,” says Dr. Benjamin Mock, a parentologist and leading MOOP entrepreneur at Cranford.

The ferment is attributable in part to MOOPs hitting at exactly the right time. Our increasingly competitive and flat world cannot take the risk of allowing individualized parenting, which is often done by people with less than spectacular parenting skills. Traditional parenting is simply too inefficient and not cost effective. Bricks-and-mortar homes are unlikely to keep up with the demand for advanced parenting. In-home parents are also under tremendous financial pressure, especially in the United States, and unable to provide the kind of hands-on parenting of previous generations. With MOOPs, however, the cream of the parenting crop — parents who otherwise might have only raised three or four (at most maybe eight or nine) children — can reach thousands, or even hundreds of thousands of children.

Dr. Mock got involved in because he wanted to bring quality parenting to “the people who otherwise would never be able to get good parenting,” he says. Following a path blazed by the open-source software movement, he started a project to post online free parenting videos and handouts. His approach was fairly crude, he admits: just record the parental lectures, put them online and hope for the best. But to his astonishment, strangers started coming up to him and saying, “Are you Professor Mock? I've been taking ‘Do Your Homework’ with you!” He began to grasp how far online parenting could reach, and started working on a scaled-up version of his system. “When one parent can raise 50,000 children,” he says, “it alters the economics of parenting.”

Since even the best parents don't have a clue about how to exploit the online medium, companies develop their courses in-house, working with parenting experts to make the child-rearing as effective as possible.

MOOPs address the problem of a lack of the individual attention normally associated with traditional parenting with support discussion forums, video feeds and other basic online services, so that an instructor parent only has to provide the content.

Online discussion forums are a good way to bring communities of children together — for 100 or so users. “With 100,000 children it gets more complicated,” he says. Hundreds or even thousands of children might end up asking the same question. So the developers implemented a real-time search algorithm that would display related questions and potential answers before a child could finish asking.

Mock also let children vote items up or down, much like on the link-sharing website Reddit, so that the most insightful questions would rise to the top rather than being lost in the chatter. “No more ‘Why is the sky blue, Daddy?’ in these discussions!” Mock exclaims.

Virtually everyone participating in this upheaval agrees on one thing. In-person parenting will change — perhaps dramatically — but it will not entirely disappear. “No one says that all parenting has to be online,” says Mock. “Sometimes — though admittedly rarely — a home is better. But a home really isn’t at all profitable, is it?”
Posted by Mark Byrnes at 7:00 AM No comments: