The Enduring Appeal of the "Great Leader" Myth

That's probably my favorite joke from President Obama's Correspondents Dinner routine, because it exposes the silliness of some of the criticism he's taken for his alleged lack of leadership. If only he'd spend more time schmoozing with members of Congress, then he might be able to get more legislation passed. Right. Mitch McConnell and John Boehner would just love to help the president with his agenda if only Obama would spend more time with them.

This kind of critique is all too common, because it is all too easy. Truly understanding the power dynamics of the House and the Senate, as well as the Republican and Democratic parties, is hard work. It is so much easier to just say the president hasn't led, and pretend there is some easy and obvious solution to the problem; say, schmoozing.

This is, of course, nothing new. I've been working for the last few weeks on the historical literature on the period before Pearl Harbor, and there are plenty of historians who level the same charge of lack of leadership at FDR. One of the more egregious examples comes from Stephen Ambrose. Charging that FDR's pre-Pearl Harbor policy was a "dismal failure," he slams Roosevelt for failing to convince the American people to go to war with Germany before the Japanese attack.

Ambrose notes that polls showed the public was against declaring war up until Dec. 7, 1941. "What the polls could not measure," Ambrose writes, "was how attitudes might have changed had presidential leadership been stiffer." Leaving aside the rather important question of whether or not FDR actually wanted all-out war with Germany at that point (and I am not convinced he did), Ambrose never says what "stiffer" leadership could have been.

Since the war in Europe began, FDR had consistently and persistently argued that a German victory in the war would be a disaster for the United States. He urged greater and greater assistance for Britain as its needs grew in order to prevent that outcome. No one who reads what FDR said over those two years can have any doubt that he made the strongest possible argument against Nazi Germany. Yet to Ambrose, somehow or other, FDR's leadership should have been "stiffer." There was something else he could have said that magically would have convinced the public to support a declaration of war on Hitler, even though Hitler had not declared war on the United States.

The flip side of this kind of thinking is similarly to attribute whatever political success a president enjoys to leadership--usually in the form of giving a speech. That was on full display last week in the New York Times on the 50th anniversary of JFK's civil rights speech. In a news piece entitled "When Presidential Words Led to Swift Action," Adam Clymer writes: "These days it is hard to imagine a single presidential speech changing history," but the civil rights speech is now seen as a "critical turning point." In an op-ed piece entitled "Kennedy’s Finest Moment," Peniel E. Joseph says it "might have been the single most important day in civil rights history."

Now, I think the speech is important--I always talk about it when teaching about the civil rights movement. But "most important day"? Or "critical turning point"? Hardly.

Clymer says the speech "led quickly and directly to important changes." In fact, the speech did neither.

The Civil Rights Act, which JFK proposed that night, was passed more than a year later (MLK's March on Washington two months after JFK's speech was in response to the lack of quick movement in Congress). That legislation's passage was not directly due to the speech, but the efforts of LBJ (who was aided greatly by the fact that JFK's death allowed him to portray the legislation as a tribute to the martyred president) and bipartisan support in Congress.

More importantly, what both pieces neglect is that the speech is not a good example of presidential leadership (at least not in the sense that they mean it). By the time the Civil Rights Act became law, ten years had passed since the Supreme Court's Brown v. Board of Education case stated that separate is inherently unequal. That decade was marked primarily not by presidential leadership, but by grassroots organizing and protest. Before giving that speech, JFK had spent two and half years riding the fence on civil rights, while sit-ins and freedom rides and demonstrations relentlessly pushed the issue into the public consciousness. What forced JFK at last to take sides was the movement, specifically recent events in Birmingham. Whatever you call that, it wasn't "leadership."

Presidents do not make history on their own, however much some people like to pretend they do. FDR famously once told a group of supporters that he agreed with what they wanted him to do. "Now make me do it," he added.

That's how democracy works. Leaders have no magic wands that they can wave. The people have to demand that it get done, and create the political pressure. In June 1940, Eleanor Roosevelt met with some supporters who were frustrated with the lack of progressive reform in recent years. She said to them:


If you believe in democracy, you have got to work for the majority and have got to be willing to wait for it. I have done organization work practically all my life and I know that until you organize a thing down to the precincts and get a real demand from there up, there is not that majority demand for the thing and you cannot get it. You come away with the feeling that the President is willing to lead, but never too far in advance of public opinion, because that is the way things work in a democracy as understood by a politician and a democrat. 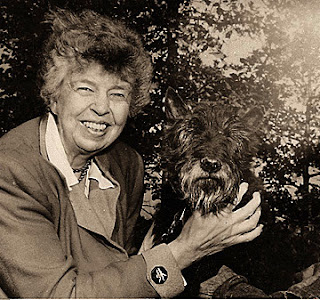 The people who don't understand that are often neither politicians nor democrats, but ideologues who are so utterly convinced of the virtue of their positions that they cannot imagine that anything other than incompetence or malice could be standing in the way of achieving their self-evidently desirable goals. They want the leader to simply do it, already!

This idea of "great person" leadership is not only mistaken, it is profoundly undemocratic. When critics bellyache about the lack of leadership, they are often betraying an authoritarian impulse to impose their own views on others, without doing the hard work of convincing others that it is the right way to go. You've got to be willing to wait for it. As frustrating as that work can be, it certainly beats dictatorship by the ideologically certain.