As I noted in my post last week, Winston Churchill cultivated the image of himself as the prophet who warned of the threats to liberty: first Hitler's Nazism, then Stalin's Communism. Now he is also being portrayed by others as a prophet who saw the threat of Islam over 100 years before 9/11.

If you do a Google search for "Churchill Islam" you will find endless pages, all quoting comments on Islam that Churchill wrote in his 1899 book The River War:

How dreadful are the curses which Mohammedanism lays on its votaries! Besides the fanatical frenzy, which is as dangerous in a man as hydrophobia in a dog, there is this fearful fatalistic apathy. Improvident habits, slovenly systems of agriculture, sluggish methods of commerce, and insecurity of property exist wherever the followers of the Prophet rule or live. A degraded sensualism deprives this life of its grace and refinement; the next of its dignity and sanctity. The fact that in Mohammedan law every woman must belong to some man as his absolute property - either as a child, a wife, or a concubine - must delay the final extinction of slavery until the faith of Islam has ceased to be a great power among men.

Individual Moslems may show splendid qualities. Thousands become the brave and loyal soldiers of the Queen: all know how to die. But the influence of the religion paralyses the social development of those who follow it. No stronger retrograde force exists in the world. Far from being moribund, Mohammedanism is a militant and proselytising faith. It has already spread throughout Central Africa, raising fearless warriors at every step; and were it not that Christianity is sheltered in the strong arms of science - the science against which it had vainly struggled - the civilisation of modern Europe might fall, as fell the civilisation of ancient Rome.

The general tone of these pages is "Churchill saw it coming. He tried to warn us about Islamism, just as he warned us against Nazism and Communism." If one reads some of the commentary on pages which quote these words (and I can't recommend that anyone do so), there is, not surprisingly, a lot of anti-Muslim bigotry. But there is more than that: what emerges is the fusion of two different strands of thought, a strange amalgamation of the religious mindset of the Crusades with the ideological battles of the 20th century (especially the cold war). 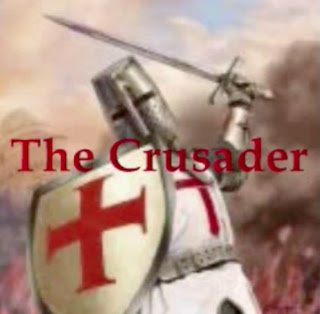 The Crusader imagery is overt. One video, showcasing Churchill's remarks, begins with an image of a crusader knight, and then the blood-red title "The Crusader" fades in. It states, in the face of overwhelming evidence to the contrary, "Muslims have never been able to create anything really useful." It also asserts the cultural inferiority of Islamic lands: "Compare what billions of muslims [sic] have been able to come up with against a small number of Jewish intelligentsia, a fraction of one percent of the muslim [sic] population and the gulf between the ignorant backward culture of mohammedianism [sic] and other faith based cultures is obvious."

Others go back even further and refer in reverential terms to Charles Martel, who is praised as saving the West from Islam at the battle of Portiers in France in 732. On a web site that defends Geert Wilders, a Dutch politician who has called for banning the Quran (he compares it to Mein Kampf), eliminating immigration from Muslim countries, and prohibiting the construction of new mosques, there is a comment that specifically connects Wilders to Martel and Churchill: "Geert Wilders is the modern European hero fighting against evil, like Charles Martell [sic], Jan Sobieski [who was responsible for the defeat of the Turks in the Battle of Vienna in 1683] and Winston Churchill."  As the picture below shows, the phrase "Islamo-fascism" further enhances the connection to Churchill the prophet. 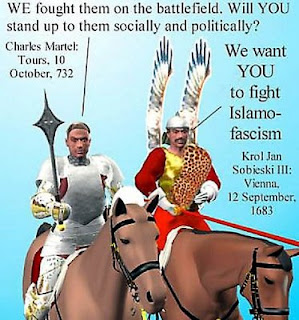 In this mindset, we see the blanket condemnation of all things Muslim.  There is no attempt to distinguish between radicals and violent extremists on the one hand and peaceful adherents of Islam on the other. All Muslims are guilty. The current struggle is with the religion itself, and goes back 1400 years.

Of course, in most polite political circles today, such ideas are beyond the pale. What is so insidious about the Churchill quotation is that it is used to validate ancient historical prejudices and wrap them in a cloak of modern respectability. After all, to reject Churchill's words about Islam is to make yourself into a latter-day Neville Chamberlain, foolishly appeasing evil. 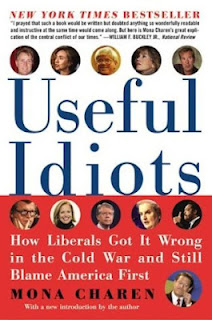 These sites also show how the tropes of anti-communism are being grafted onto Islamophobia. One of the first things that struck me is the prevalence of references to "useful idiots." Students of communism will recognize that phrase--it has been attributed to Lenin, to refer to naive liberals who trusted the radical communists and then were used by them.

Today the phrase has new currency referring to anyone who resists anti-Muslim bigotry. In 2002, Cal State Fresno professor Bruce Thornton wrote: "Now the useful idiots can be found in the chorus of appeasement, reflexive anti-Americanism, and sentimental idealism trying to inhibit the necessary responses to another freedom-hating ideology, radical Islam." Conservative columnist Mona Charen used the phrase as the title of her 2004 book, suggesting a line of continuity from this alleged cold war naivete to the fight against Al Qaeda. What this signifies, I suspect, is how much Islam has come to replace communism in the right-wing mind since 9/11.

If this were all relegated to the darker corners of the internet, that would be one thing. But the Churchill quotation occasionally finds its way to more "respectable" places as well. Radio host Michael Savage has read it on his show, and then proceeded to talk about "front groups for radical Islam." (The phrase "front groups" of course also has a long anti-communist lineage.)

That same mindset of infiltration that is the point of Savage's rant is also behind the recent attack by Michele Bachmann and four other members of Congress on Secretary of State Hillary Clinton's Deputy Chief of Staff, Huma Abedin. In a letter to the State Department, they charge "information has recently come to light that raises serious questions about Department of State policies and activities that appear to be a result of the influence operations conducted by individuals and organizations associated with the Muslim Brotherhood." Like the red-baiters of the late 1940s and 1950s, they find in any policy with which they disagree the influence of the foreign "other."

The Churchill quotation shows up in the "comments" section of the website of Daniel Pipes, who has a doctorate in history from Harvard. After 9/11, Pipes created Islamist Watch, to track attempts to impose Islamic law on the U.S. His most recent post on his blog is fulsome in its praise of Mitt Romney's speech in Jerusalem. Pipes pays no attention to the most controversial part of the speech, in which Romney suggested that the reason that Israel's economy outpaces that of the Palestinians is culture: "if you could learn anything from the economic history of the world it’s this: culture makes all the difference. Culture makes all the difference."

It is hard not to notice that Churchill's words associate Islam with poverty. I do not believe Romney was in any way referencing the Churchill quotation or trying to appeal to people familiar with it. (David Frum had an interesting post recently suggesting that Fox News often does engage in conscious appeals to this dark underside of our political discourse--he calls it the "Fox News Wink.")

My point is that once reasonable ideas can be bastardized by fringe elements, and then these more unseemly underground manifestations have a way of bubbling back up to mainstream discourse, even in ways that the speaker may not realize--but the listeners certainly do.

This Churchill quotation serves as a rhetorical bridge for extremists--it connects the modern struggle against radical Islamists such as Al Qaeda and its offshoots with both the historical defense of Christian Europe from the Muslim invaders and the liberal democratic capitalist resistance to the radical ideologies of the 20th century. That is a potent combination. It is also a toxic one. In neither case is it fueled by any sophisticated understanding of those historical episodes. Instead, it taps into the worst aspects--the fear and hatred and tribalism--that emerged from both.

Going back to the original incident that prompted this discussion--Romney's pander about returning the bust of Churchill to the Oval Office--I think the lesson is this: Words have historical baggage. When politicians are tempted to use certain forms of cultural shorthand to score quick and easy political points, they would be well-advised to tread carefully--you never know what kind of message you may be sending.
Posted by Mark Byrnes at 7:00 AM