The Republicans: The New Whigs?

I've never seen a poll on this, but I'd guess that most Americans couldn't identify the Whigs. Of all the major political parties in American history (defined as those that got at least one president elected), they remain the most obscure. Their brief history, however, is looking strangely relevant to me these days.

The Whigs were one of the two major parties in what American historians call the second party system. The first party system was the Federalists (led by Washington, Adams, and Hamilton) and the Republicans (led by Jefferson and Madison), which lasted roughly from the 1790s to the 1810s. The third is today's Democrats and Republicans, which emerged in the mid-1850s. In between was the second, made up of the Jacksonian Democrats and the Whigs.

I've always found it a bit of challenge to teach about the Whigs, because they represented an odd collection of views. The very name reflected their amorphous identity.

The name has two meanings. Since they claimed as a foundational principle a dedication to the republican government of the Founders, and the Whigs were the anti-monarchy party in Britain, the American Whigs adopted the same name.

There was a second meaning, however. On a practical level, one of the organizing principles of the party was its opposition to Andrew Jackson, whose high-handed style led them to label him "King Andrew." So the American "Whigs" were the opponents of the "King," Andrew Jackson. This led to some odd political bedfellows in the Whig Party. While it is certainly possible to identify a Whig ideology (active government, particularly in pursuit of economic development), there were also members of the party who were not supporters of the ideology, but who sided with the Whigs out of an anti-Jackson animus.

So, for example, when Jackson faced down John C. Calhoun and the state of South Carolina during the nullification crisis of 1832-33--despite the fact that the Democrats were the party of states rights--some of the more vehement supporters of states rights joined the Whigs.

The resulting ideological incoherence came out in the presidential election of 1840, the first the party ever won. To hold together its diverse anti-Jackson coalition in the race against Jackson's successor, Martin Van Buren, the Whigs nominated the old Indian-fighting general, William Henry Harrison.

For most Americans, that campaign is remembered (if at all) for its alliterative slogan: "Tippecanoe and Tyler, Too!" John Tyler, the vice-presidential candidate, was in the words of Daniel Walker Howe an "eccentric Virginia state-righter," who joined the Whigs "because he found Andrew Jackson high-handed."

The Whigs, as Howe notes, "possessed a more coherent program" than the Democrats, but when Harrison died only month into his presidency, Tyler--who did not believe in most of that program--became president. He then proceeded to thwart his own party on important issues such as a national bank and tariff policy. The ideological incoherence of the Whigs wrecked their first administration.

What does this have to do with today?

My last post examined the ways that various forms of conservative thinking have been clashing below the mudslinging surface in the Republican debates. This, I argue, suggests an ideological cracking up of the Reagan coalition that has survived and prospered since 1980.

What holds it together? Right now, one thing: hatred of Barack Obama.

No matter how nasty things get in this primary season, all of the candidates and their surrogates return to that theme: the need to defeat Obama. After winning the Florida primary Tuesday, Mitt Romney tweeted:


Thank you FL! While we celebrate this victory, we must not forget what this election is really about: defeating Barack Obama.

Whenever they are searching for unity, they go back to that.

That's fairly natural. Obama is the incumbent president, after all. But there is a particularly harsh edge to it this time. It's personal, it's vitriolic, it's irrational. And it's potent.

That is what reminds me so much of the 1830s: the tendency to reduce the party platform to the opposition to an individual, to personalize everything. It is no coincidence that its enemies never call it "The Affordable Care Act," but rather "ObamaCare." There is a whole "King Obama" meme on the internet, like this Photoshopping of Obama's head onto a famous painting of Emperor Napoleon. 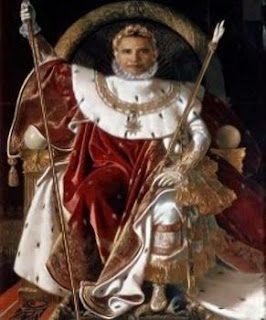 The effects of another Obama term are put in apocalyptic terms. It's not his policies, but his person. New Jersey Gov. Chris Christie, in a Romney radio ad, says: "America cannot survive another four years of Barack Obama." Seriously? Cannot survive? This, from the campaign whose slogan is "Believe in America"?

Of course, apocalyptic rhetoric is practically the norm in American presidential elections. One Whig, in the 1840 campaign, said the following about President Van Buren:


Wherever you find a bitter, blasphemous Atheist and an enemy of Marriage, Morality, and Social Order, there you may be certain of a voter for Van Buren.

Republicans today would need to do little more than change the name.

There is, of course, not much evidence put forth to justify the gloom and doom. As comedian Bill Maher noted, the opposition to Obama is mostly to a deluded fantasy of the man, not the actual president: "Republicans have created this completely fictional president ... The Republican hatred of Obama is based on a paranoid feeling about what he might do, what he's thinking, what he secretly wants to change."

Note how Gingrich put it Tuesday night: "If Barack Obama gets re-elected, it will be a disaster for the United States of America, make no bones about it.... you can’t imagine how radical he’ll be in his second term." No, Newt, I can't. Because he has never been a radical president, outside of your fevered imagination. The Republican caricature of "Obama the radical" is nothing but imagining.

(Again, this is not unlike the Whig caricature of Jackson--he was called "King Andrew," but his era is now more commonly known as the "Age of the Common Man," because of the democratizing forces that brought him into office.)

What the Republican Party as an institution needed more than anything after the George W. Bush years was some serious ideological self-examination. The Tea Party, for all its many faults, was at least in part an attempt to begin that process. But if the pundits are right, and the nomination is now inevitably going to Mitt Romney, that will not happen.

Romney is a man without any ideological core. There is no ideological there there. He will say or do anything to be president. In poll after poll, Republican voters say that they support him mostly because he is seen as the most electable, the most likely to defeat Obama. The fact that he does not truly stand for anything is secondary to the hope that he will vanquish their fictional "King Obama."

Already, voices on the right are crying out in despair. This week an editorial in the Wall Street Journal began: "Let's just say right now what voters will be saying in November, once Barack Obama has been re-elected: Republicans deserve to lose."

And the target of their ire is the ostensible candidate of Wall Street, Mitt Romney:


Thus the core difference between Mr. Romney and Mr. Obama: For the governor, the convictions are the veneer. For the president, the pragmatism is. Voters always see through this. They usually prefer the man who stands for something.

Another voice from the right, of a more Tea Party bent, had this to say:


The Establishment could not have made a more strategic blunder. They will, in all likelihood, succeed in securing the nomination for Mitt Romney, but the damage they have inflicted upon themselves is approaching irreversible. The public now sees the length to which the Establishment will go to make certain their hand-picked candidate is chosen regardless of the dire circumstances facing the nation.

Average Republican or conservative voters are the same people that buy the books or magazines or subscribe to the websites ... A number of them (how many is anyone's guess right now) will no longer be willing to support those factions within the Establishment and the Party or to believe what they are told. These are the people suffering the consequences of the disastrous policies pursued over previous decades, while those in the Establishment live lives of relative ease and comfort, which seems to be their primary concern.

The cracks are showing. For now, they are being papered over with posters bashing "King Obama." For all I know, given the hard economic times, that could be enough--for now.

Historian Michael Holt, the author of a comprehensive account of the Whigs, wrote:


the history of the Whig Party can best be understood in terms of a tension or balance between centrifugal forces that always threatened to tear it apart and the centripetal force of conflict with Democrats that held it together.

Under the strains of the polarized politics of the 1850s, the Whigs fell apart and disappeared.

Today, the Republicans are in no danger of disappearing, but they are being held together by their centripetal forces. Like the Whigs, they ignore the centrifugal forces of ideology at their peril.