[This post was originally published on the History News Network.]

All of us who teach face a daily, daunting task: how do we take our subject matter—which we know from years of study to be terrifically complicated and nuanced—and make it accessible and understandable to our students, all while avoiding the peril of oversimplification?

We all do our best, succeeding sometimes, failing others. We are eternally grateful when we find a key: that piece of evidence, that compelling argument, that helps us do our jobs. The most prominent example of that for my teaching is perhaps Richard Nixon’s infamous comment to David Frost about his actions during the Watergate scandal: "Well, when the president does it, that means that it is not illegal."

That one simple sentence helps me communicate to students the essence of the danger inherent in the many complicated events that we call “Watergate”: Nixon’s sincerely held belief that as president he was incapable of committing an illegal act; that whatever he deemed necessary to security of the United States was, by definition, legal. It was a sentiment more consistent with the absolutism of Louis XIV than the constitutional principles that gave birth to the nation. What makes those words so powerful is that they come not from one of Nixon’s many implacable political foes, or from a historian interpreting his actions. They come from the man himself.

Since the release of the Senate Intelligence Committee’s torture report last week, I’ve been struggling with how to synthesize the multiplicity of reactions it provoked. Then on Sunday, I saw former Vice President Dick Cheney on “Meet the Press.” 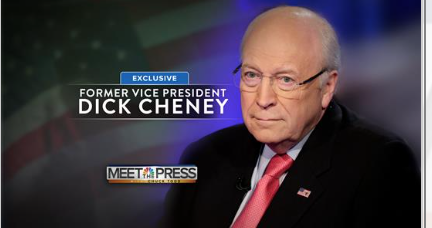 Amidst all the dissembling, Cheney made one remark that struck me as his David Frost moment.

Moderator Chuck Todd confronted Cheney with evidence that 25% of the detainees were innocent, and that one was physically abused so badly that he died. Cheney replied: “I'm more concerned with bad guys who got out and released than I am with a few that, in fact, were innocent.” When pressed about whether it was acceptable to abuse innocent people even to the point of death, Cheney said: “I have no problem as long as we achieve our objective.”

Keep in mind, Cheney was not talking about the accidental death of innocents on the battlefield. Every war involves the accidental death of innocents, but just war standards command that every reasonable effort be made to avoid them. This was someone in the custody of the United States, who had done no wrong and was mistakenly taken into custody, whose physical mistreatment by representatives of the United States killed him while in custody. Faced with that travesty of justice, Dick Cheney could not even muster a perfunctory expression of regret.

Confronted with an unquestionable injustice, Cheney says: “I have no problem as long as we achieve our objective.” That is the essence of everything wrong with the Bush-Cheney “war on terror.” It admitted no principle whatsoever as superior to the objective of keeping the nation safe. Fundamental human rights—even of innocent people—can be violated with impunity, Cheney asserts. Even after being presented with evidence that an innocent man was killed, Cheney blithely said, “I'd do it again in a minute.” The end justifies the means.

That is the mindset of the authoritarian. Dictators the world over use that logic every day. Dick Cheney will never admit that the techniques he endorsed constitute torture—to do so would be to admit he is a war criminal. But he has now admitted, beyond any doubt, that he has the mentality of a torturer.