A new heir to a powerless throne was born last week, and a portion of the American public went into a collective tizzy over it. Predictably, another portion went into a tizzy over that, and muttered some variant of "George Washington [or some other Founder] must be rolling over in this grave."

As an American of Irish descent, I don't go in much for British royalty worship, but I suppose it is no more harmful than many other types of American celebrity adoration. But these two types of responses got me thinking about the nature of the American relationship with the former mother country. 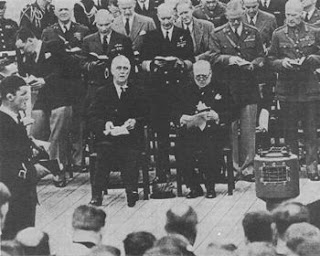 For the vast majority of living Americans, it has always been the "special relationship," but that is actually of fairly recent vintage, forged in the crucible of World War II (and visually captured by this image of FDR and Churchill, meeting on a British naval vessel in August 1941, singing "Onward Christian Soldiers").

As so often happens, the memory of the living is incomplete.

One need not go back to the Revolution to find Americans who would be appalled at the sight of last week's American attention to a British royal birth. For at least the first century after American independence, Britain was the enemy of the United States: at war from 1812 to 1815, at odds for most the next few decades (including a near-war over Oregon in 1846), no other country caused 19th century American presidents more consternation than Britain.

Not even fighting on the same side in the first World War completely changed that. American Anglophobia was still alive as FDR and Churchill were meeting in the summer of 1941. The United States was in the midst of the Great Debate over the extent of American involvement in World War II. Pearl Harbor lay months in the future, and isolationists continued to argue that the United States should not enter the war. There were plenty of Americans who rejected the idea that there was any "special relationship," or that American interests overlapped much with those of Great Britain.

While their arguments against American involvement were numerous, one is particularly relevant here: it would mean fighting for British imperialism. In April 1941, in a nationally broadcast radio debate, Fay Bennett, executive secretary of the Youth Committee Against War said: "if you have any faith that the British Empire is going to bring peace and democracy to the world, I would like one bit of evidence to that effect."

A particular focus of this line of argument was British rule in India. Gandhi's independence movement had put the British in the awkward position of fighting German imperialism in Europe while defending their own in Asia. As Churchill later said in November 1942, "we mean to hold our own. I have not become the King's First Minister in order to preside over the liquidation of the British Empire."

The isolationist argument that America should not assist British imperialism was so common that an interventionist anticipated it in one debate: “I don’t think the present regime in England … and even what is going on in India—I suppose some of you people will want to bring that up—can in any way compare to the world we would have to live in if Hitler were the victor.”

The defenders of aid to Britain often resorted not to appeals to any "special relationship," but instead fell back on the idea that the British were simply the lesser of evils in this fight.

Pearl Harbor ended all that, as the German declaration of war brought the U.S. fully into the war on the same side as Great Britain, and Churchill came to the U.S. and lived at the White House for several weeks.

That result was no accident, however. It was the product of over 40 years of wise diplomacy by the British Foreign Office, which surveyed the world situation in the 1890s and made a conscious decision to cultivate American friendship. It saw three rising powers in the world: the U.S., Germany, and Japan. It could not successfully oppose all three, so Britain choose to accommodate the rise of American power and hoped to enlist it in the fight to thwart the other two. In December 1941, Britain saw that decision pay off magnificently, as America joined forces with Britain to defeat the designs of Germany and Japan.

I'm quite confident that officials of the British Foreign Office never anticipated American "royal baby mania" in 2013. In some sense, however, the unthinking American adoption of the British royal family witnessed last week is also an unintended product of their diplomacy.