Last week, a reporter asked President Obama the inevitable question: was his administration like that of Richard Nixon? That the question was so predictable made it no less absurd. "I’ll let you guys engage in those comparisons," Obama replied. "And you can go ahead and read the history, I think, and draw your own conclusions."

Of course a historian will like his advice: "read the history." The president's problem is that people do not know the history of Watergate and are unlikely to read it. (For those who are interested, Elizabeth Drew has a nice summary of Nixon's misdeeds.)

Since the early 1970s, almost every case of any kind of misbehavior in the political realm gets saddled with the Watergate comparison, and just about every comparison to Nixon and Watergate ends up being silly (for example, the case of Wisconsin Governor Scott Walker's phony Koch brothers tape as I noted here).

Why do we repeatedly do this? The problem, as I see it, is in the name: "Watergate." By assigning that single word to the Nixon administration's many crimes, we reduce them to something small and petty. They were anything but that, but most of us don't know it.

For Americans born after the 1960s, the term "Watergate" is likely little more than a synonym for political scandal.  Even those (like me) with some memory of the scandal are unlikely to remember more than a few basic facts: a group of thugs associated with the Nixon re-election campaign stupidly broke into the Democratic headquarters and got caught, Nixon panicked, tried to cover it up, and then was done in by the foolish efforts to cover-up an incident that, in the end, was really no big deal. 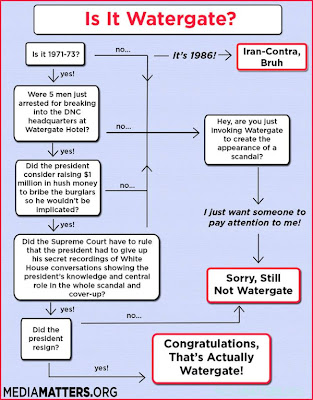 In a perfect example of that flawed conventional wisdom,  Newt Gingrich, when asked about the president's recent troubles, said: "It's always the cover-up that kills you."

That's simply wrong, but you hear it whenever there is a new Washington "scandal."

What it neglects is this: Nixon had plenty he needed to cover up. I've never thought that Nixon ordered the break-in at the Watergate hotel, and to this day no definitive evidence shows that he did. The important fact, however, is that that does not matter. Nixon's motive for the cover up was that the men involved in the break-in were involved in plenty of other nefarious activities, ones that Nixon did know about and often did order. The burglars answered to people close to Nixon who had direct knowledge of the president's involvement in numerous criminal activities.

Nixon's plan was to throw the burglars under the bus, but bribe them to keep quiet. It didn't work. They talked, and then others began to talk too--most notably Nixon's lawyer, John Dean. (Dean is on record saying that nothing going on today approaches the seriousness of the Nixon years.) That led to the revelations of widespread abuse of power that finally forced Nixon from power.

The Nixon of the common understanding of Watergate was stupid, or crazy, or both. I reject that interpretation. Nixon was many things, but stupid is not one of them. As the pressures of the Watergate scandal grew, one can make the case that he may have become mentally unhinged. But the actions that forced him from office were done when Nixon was in full command of his faculties. They reflected who he was. One's actions usually do.

Perhaps we will find that a secretly Nixonian Obama gave orders that the IRS screw anyone associated with the Tea Party (if so, they did a terrible job of it--none of the organizations subjected to extra scrutiny were denied tax-exempt status). Maybe we'll learn that he became so obsessed with leaks that he suggested poisoning reporters, as Nixon suggested should be done to Jack Anderson.

But it is far more likely that we'll find that this brouhaha has been just another uninformed use of the Watergate analogy. If we read the history.
Posted by Mark Byrnes at 6:00 AM