I spent much of the month of September playing Franklin Roosevelt in the Spartanburg Little Theater's production of "Annie." Having mimicked FDR for decades, it was great fun to actually play the role.

Of course, the pedantic historian in me had to struggle mightily to refrain from pointing out how absurd the storyline involving FDR is. For those who don't know the story (I didn't before being cast), Annie accompanies Daddy Warbucks to a meeting with FDR in December 1933. FDR and his advisors are in despair over the depression, but Annie's sunny optimism rallies them and inspires the New Deal.

Needless to say, this isn't terribly accurate! The phrase "new deal" was first used by FDR in his July 1932 speech accepting the Democratic nomination for president. The famous first hundred days, beginning in March 1933, had already established the tone of the New Deal.  And, as far as I know, an adorable, red-headed, 11-year-old orphan girl had nothing to do with it! 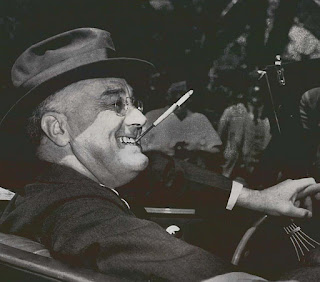 The way the play employs FDR as a dramatic device, however, got me thinking about how we perceive our presidents. At the last performance, one of my Wofford colleagues saw me on his way out of the theater, and said "Good old American optimism prevails again!"

And that really is the message. The ubiquitous "Annie" theme "Tomorrow" is the epitome of sunny optimism. So of course the play uses FDR. The image most Americans maintain of FDR is the one shown here: big grin, cigarette holder jauntily titled upward. It practically oozes optimism.

This is the "character" FDR that we recall. He is, of course, based on reality. "Annie" has FDR twice repeat the most famous line from his first inaugural: "the only thing we have to fear is fear itself."

But more important, I'd argue, is what FDR says before that famous line: "This is preeminently the time to speak the truth, the whole truth, frankly and boldly. Nor need we shrink from honestly facing conditions in our country today."

FDR's was no mindless optimism. It began with a sober assessment of the real and daunting problems the country faced. It was not mere exhortation, it was a promise: "This Nation is asking for action, and action now." FDR promised action, and delivered. Even when some of those actions failed, people credited him for the effort.

The other hovering presidential presence in "Annie" is Herbert Hoover. He isn't a character, but there is a sarcastic song called "Hooverville." A group of homeless people sing, "We'd like to thank you Herbert Hoover, for really showing us the way... You made us what we are today."

The caricature of Hoover is as complete as that of FDR: he is the dour presence who failed to end the depression. What most people forget is that Hoover was relentlessly optimistic in his rhetoric, too.

In May 1930 Hoover said: "While the crash only took place six months ago, I am convinced we have now passed the worst and with continued unity of effort we shall rapidly recover. There is one certainty of the future of a people of the resources, intelligence and character of the people of the United States—that is, prosperity."

In October 1932, as the depression was approaching its worst months, he said: "the tide has turned and ... the gigantic forces of depression are today in retreat."

The American people expect optimism from their leaders, but optimism is not enough. They expect results.

Today, President Obama is trying to capture FDR's optimism, but history suggests that won't be enough to win re-election. Yes, the public likes to hear that "tomorrow, there'll be sun," but optimism is not a good election strategy.

Maybe the Republicans will nominate a candidate too extreme for independents to stomach.

Maybe the public will blame the obstructionist Republicans in Congress for preventing action.

Maybe the electorate will go for Obama again, even if the economy hasn't turned around.

But I wouldn't bet my bottom dollar on it.
Posted by Mark Byrnes at 1:49 PM