Six years ago, my colleague Li Qing Kinnison and I led a group of students on a three-week trip to China during the January interim. Everywhere we went, there were signs of American corporations: McDonald's, Pizza Hut, Kentucky Fried Chicken, and my favorite example of all—in Beijing, in the Forbidden City itself, a Starbucks. You could hardly ask for a clearer picture of the triumph of global capitalism.
The other ubiquitous image, of course, was the leader of the Communist revolution, Mao Zedong. His huge portrait still looms over Tiananmen Square in Beijing, and on t-shirts, posters, and wristwatches. 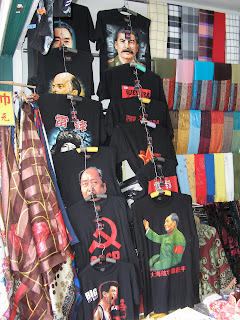 The contradiction is obvious. Mao was not just a communist, he was a particularly radical one. His hostility to any semblance of capitalist enterprise nearly destroyed China, especially in the late 1950s and mid-1960s. Yet he is still venerated in China, even as the state pursues policies that would (were his body not preserved and on display) have him spinning in his grave.

So what gives? Once historical figures leave the stage, there is an inevitable tendency for the historical record to morph into myth. Memory becomes selective. We forget the part of the record that's inconvenient and elevate what is useful. So the horrors of the Great Leap Forward and the Cultural Revolution disappear, and instead many Chinese remember Mao only as the leader of the revolution that ended decades of political chaos and founded the modern Chinese state.

The reason I note this now is that we are seeing a version of this, albeit a milder one, in American politics today. In the Republican Party, Ronald Reagan has been raised to sainted status. But every day, we see Republicans espousing positions and using tactics that Reagan's actual historical record directly contradicts.

The current debt ceiling debate is a case in point. As president, Reagan requested 17 increases in the debt ceiling. Not only that, but in doing so he spoke in terms indistinguishable from those used today by President Obama. On November 16, 1983, Reagan wrote to the Senate:


[T]he Treasury Department cannot guarantee that the Federal Government will have sufficient cash on hand on any one day to meet all of its mandated expenses, and thus the United States could be forced to default on its obligations for the first time in its history….The full consequences of a default—or even the serious prospect of a default—by the United States are impossible to predict and awesome to contemplate … the Senate must pass this legislation before the Congress adjourns.

In his diary, he was more direct:


Last night the Repub. Sen. very irresponsibly refused to pass an increase in the debt ceiling which is necessary if we’re to borrow & keep the govt. running…. I sounded off & told them I’d veto every d--n thing they sent down unless they gave us a clean debt ceiling bill. That ended the meeting. (The Reagan Diaries, p. 192)


If we don’t have an extension of the debt ceiling by the 15th we will have to sell gold or default on bonds.  D--n their hides (the Cong.), we’ll default for the first time in our history. Something has to wake those d--n prima donnas up. (The Reagan Diaries, p. 365)

On his radio broadcast that year, Reagan said:


Congress consistently brings the Government to the edge of default before facing its responsibility. This brinkmanship threatens the holders of government bonds and those who rely on Social Security and veterans benefits.

Reagan could not have been clearer: playing political games with the debt ceiling was highly irresponsible. Yet today’s Republicans, who claim to venerate Reagan, are doing precisely that, and some even call President Obama a liar for saying the same things Reagan did. Republican Rep. Joe Walsh of Illinois said:


President Obama, quit lying. You know darn well that if August 2nd comes and goes there is plenty of money to pay off our debt and cover all social security obligations. And you also know that you and only you have the discretion to make those payments.

The reason we have no deal is that Republicans refuse to entertain any compromise that includes any increase in tax revenues. But Ronald Reagan signed 11 bills raising taxes (more times than he cut them). Republicans today insist that no deal that raises any revenues, in any way, is acceptable—even if it is eliminating tax subsidies for corporations, even if those new revenues get in return tremendous spending cuts.

In 1982, writing in his diary of Rep. Jack Kemp’s opposition to one of those tax increases, Reagan said: “He is in fact unreasonable. The tax increase is the price we have to pay to get the budget cuts.” (An American Life, p. 321)

Reagan, for all of his conservative principles, was an inveterate compromiser. In his autobiography, he denounced the "radical conservatives" when he was California governor for whom "'Compromise' was a dirty word." He was impatient with their zealotry:


they wouldn't face the fact that we couldn't get all of what we wanted today. They wanted all or nothing and they wanted it all at once. If you don't get it all, some said, don't take anything…. If you got seventy-five or eighty percent of what you were asking for, I say, you take it and fight for the rest later. (An American Life, pp. 170-171)

Reagan's description fits well the deal Obama offered Republican Speaker John Boehner: $4 trillion in deficit reduction, with $3 trillion in spending cuts and $1 trillion in new revenue. He offered Republicans 75 percent. They said no, they wanted all or nothing. And they continue to raise the specter of a default that Reagan regarded as irresponsible.

Reagan's record as president would make him utterly unacceptable as a Republican candidate for office today, because Republicans today venerate not Reagan, the historical figure, but Reagan the conservative icon. The latter bears only a passing resemblance to former, and is being used in ways that the historical Reagan explicitly rejected.

Well, it could be worse. He could be on public display in Washington. At least Reagan, unlike Mao, gets to spin in his grave.
Posted by Mark Byrnes at 8:00 AM